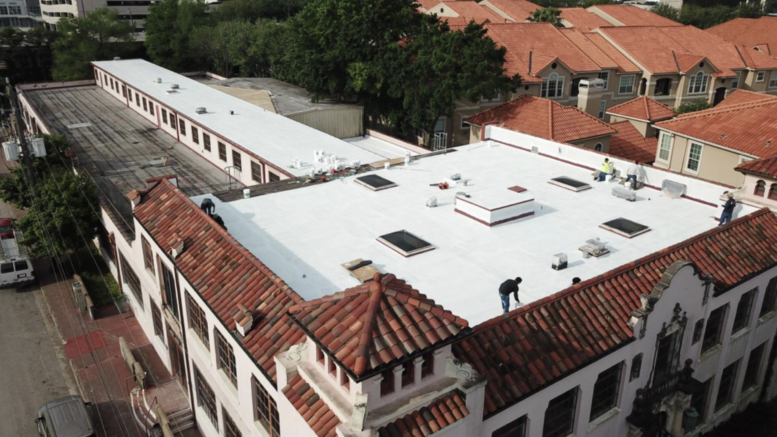 When Ian Wilson was asked to check out the roof on a historic structure in Houston that was being redeveloped, he knew it would be an interesting project. Originally built in approximately 1930 as the headquarters of the Star Engraving Company, the building later served as a cultural center and a theater for the Stages performing arts organization. The site was renovated by developer Radom Capital and transformed into a retail, office and mixed-use facility in 2020.

Wilson is president of Market Makers Inc., a Houston-based manufacturers rep firm servicing the commercial and residential roofing markets. He’s often contacted by building owners and roofing contractors to provide advice and write specifications. “I got involved and wrote specifications for the owner,” Wilson says. “We started talking about their budgetary concerns and what they were trying to accomplish, and we looked at the whole project.”

As he walked the roof, Wilson saw historic clay coping caps and a section of metal roofing that had been installed over the theater stage. The existing modified system over the main roof was still in good condition, and Wilson realized it would be a great candidate for a high-solids silicone coating. He specified Karnak 670 for the vast majority of the project. “The modified was nearing the end of its useful life, but it was still performing,” he says. “The roofs all had relatively good slope. The idea was, do we get another two or three years out of this modified, or do we coat it, and have a reflective roof system that’s going to be energy efficient and cool off the building. The coating is going extend the life of this roof for another 20 years. That was the logic.”

Eliminating the tear off would also minimize waste — and allow work to begin on the inside of the building right away. “It sped up their process pretty dramatically,” says Wilson. “It was an excellent choice from a sustainability issue and an energy-efficiency issue.”

In an area that was to covered with plaza pavers for outdoor dining and entertaining, Wilson recommend installing a Fleeceback TPO system from Versico. “The plaza pavers would be on pedestals, and we wanted to make sure the system could cope well with high pressure points,” he says. “So, I said, ‘Let’s put TPO over the existing modified in that area, and then you are good to go there.’ The rest of the roof was coated with silicone. We coated all of the walls and all of the field, except for the area we installed a full TPO system. I wrote a spec that encompassed all of the low-slope areas of the roof.”