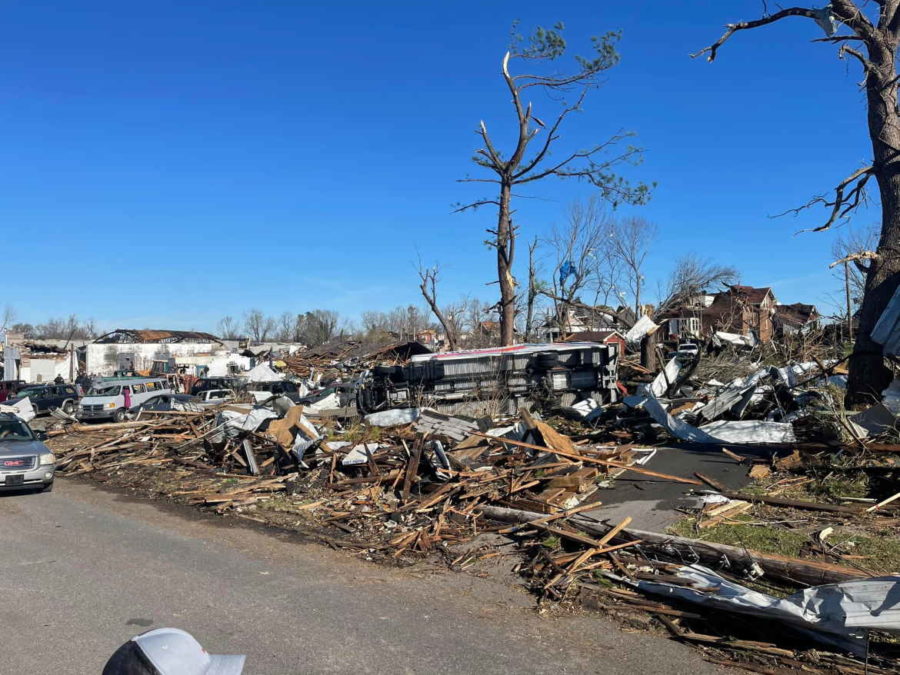 Following the aftermath of powerful tornadoes that swept through the southern United States, Jamie Young, a sales representative with True Line Builder and Roofing in Kentucky, summed up what she is seeing in two words: “pure devastation.”

“It’s absolute tragedy what you’re seeing, and you can only help who you can help,” she said. “The rest of their homes are gone, they’re just fortunate enough they didn’t lose their lives, but their homes aren’t helpable.”

The deadly late-season tornado outbreak on Dec. 10-11 caused cataclysmic damage and at least 90 deaths, devastating cities in Missouri, Illinois, Tennessee and Kentucky. The EF5 tornado — the most destructive classification of tornadoes — that traveled 220 miles is the first storm of this magnitude in the U.S. since 2013.

The tornadoes in Kentucky were particularly destructive, causing at least 76 confirmed deaths and causing at least 1,000 families to have severely or completely destroyed homes, leaving them without electricity, water or heat.

With winter weather looming, people with damaged roofs – if they still have roofs – will need to seek shelter elsewhere, leaving what possessions they do have behind, unless their roofs can be adequately tarped. It’s why Young, who normally isn’t working in the field, and the rest of True Line’s workers are out helping wherever they can.

“We’re going around from neighborhood to neighborhood offering free assistance for those in need and don’t have any way of paying for anything, and our list is just tremendous, it’s absolutely tremendous and overwhelming,” Young said.

“You see things around the world that occur, but until you actually step foot in those areas and see it for yourself, and feel it – it’s really feeling it for yourself – does it really hit home,” Young said.

Roofing Contractors Donating to the Cause

Among the roofing contractors in the area is Gladiator Roofing and Restoration out of Indiana. Dustin Rees, president and CEO, has been coordinating efforts with his company to donate supplies to victims in Kentucky, whether it’s water, clothing or diapers, as well as bringing as many tarps as they can to the area. They’re even bringing toys to help lift the spirits of kids during the holidays.

He noted that contractors aren’t going in to rebuild until search and rescue operations are done looking for victims. Once they’re cleared, though, Gladiator Roofing already has a truck loaded with supplies to help seal up homes.

“I think the most important thing is mitigating any further damage just to take the liability off the homeowner,” he said.

Prescription Roofing Owner Brandon Cervoni is helping in Kentucky as well, establishing connections with people in need to provide supplies that were donated to his company. He said once it’s appropriate, his company will be helping people assess the damage and rebuild over the next several months while partnering with RestoreMasters.

Having worked tornado-damaged areas in the past, he said he is struck by the damage he’s seeing, especially in towns like Bowling Green, Mayfield and Dawson Springs in Kentucky.

“Where it hit, it hit direct neighborhoods, it hit towns,” Cervoni said. “Most of the stuff that was affected by the tornado was a total loss. You don’t see a whole lot of just roofs blown off as opposed to entire roofing systems gone, or some kind of tree thrown into the house, or ripped half the house off.”

Aaron Christy, owner on Indy Roof City in Indianapolis, Ind., said his company is unable to be on the ground to help out, but is still helping victims in Kentucky. His company is teaming up with HailTrace to raise funds and supplies for the recovery efforts. Indy Roof is matching all donations up to $20,000 at this GoFundMe link.

“Those people need a lot of help, so we wanted to give back in a way that directly helps them,” said Christy. “It’s devastating what happened, and then you have the holidays right around the corner. There’s death, which is horrible … but even children being displaced from their homes – it’s a bad situation.”

To help in the recovery efforts, RC’s parent company, BNP Media, is donating $10,000 to the relief efforts for Kentucky.

Roofing contractors looking to help in the areas affected by the tornadoes, whether as volunteers or to rebuild when the time is right, should keep in mind that extra safety training and precautions are critical.

“There are a lot potential hazards like puncture points and potentially harmful chemicals,” said Trent Cotney, CEO of Contey Attorneys & Consultants. “You really need to prepare your crews to understand the extent of the tragedy if you’re not used to this.”

“The supply-chain issue is going to continue, and it’s going to be exacerbated by storms like this,” he said.