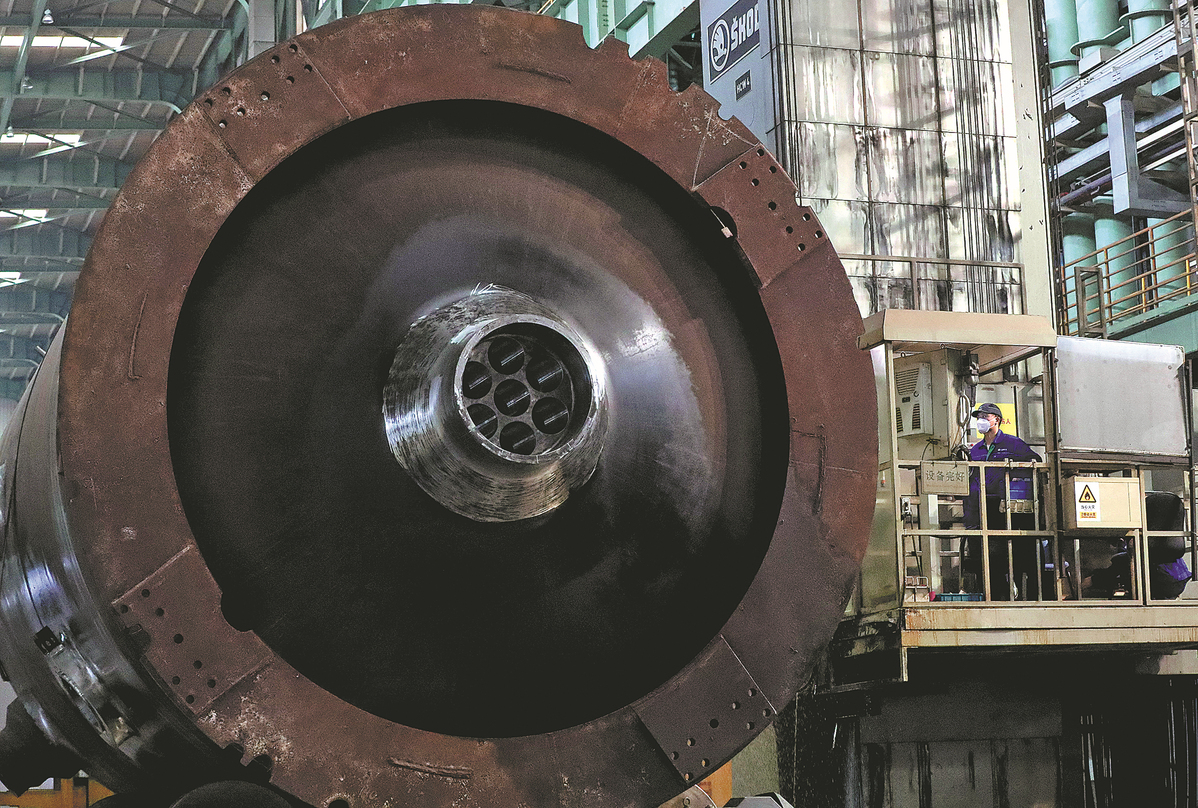 A worker operates a turbine at a factory of the Shanghai Electric group in East China's Shanghai, April 23, 2022. The group has adopted closed-loop management to continue production.

While efforts to contain COVID-19 continue in Shanghai, the city's key industries and enterprises are gradually resuming production to ensure the needs of industrial and supply chains can be met.

As of Saturday, more than 700 vehicles have rolled off the restarted assembly line at SAIC Motor's plant in Lingang in the southeast of the city, said Ji Qiwei, vice-general manager of SAIC Motor Passenger Vehicle.

SAIC, China's largest listed automaker, began running stress tests at the plant on April 18, and the first complete vehicle rolled off the assembly line on April 19.

"With the gradual recovery of logistics and the supply chain, we have started to evaluate our production line and supply chain and adjust preparations for resumed production. The stress tests will allow us to further expand capacity," said Chen Peifeng, a director at SAIC Motor's Lingang plant.

"We have restored 90 percent of our production capacity, and 75 percent of our front-line staff have returned to work," said Jiang Cailin, general manager of Shanghai Electric Nuclear Power Equipment.

More front-line staff will get back to work in the following days, he added.

Currently, 70 percent of the city's 666 key enterprises have resumed operation, Zhang Wei, vice-mayor of Shanghai, said during a news conference on Friday.

The resumption of production at these bellwether enterprises will drive a large number of companies along the manufacturing and industrial chains to resume production, said Wu Jincheng, director of the Shanghai Commission of Economy and Informatization.

According to Chen, supply chains have been challenged by the current outbreak, and the group is working hard to get them and industrial chains across the Yangtze River Delta region back to normal.

"We are evaluating more than 400 parts and component suppliers, looking into their staff, resources and production situation so that we can get production back on track amid the current outbreak conditions," Chen said.

Ji of SAIC said, "The domestic market may be impacted a little by the COVID-19 outbreak this year, but our export market will continue to see strong growth."

He added that the company exported 250,000 passenger vehicles last year.

Currently, customs clearance and transportation efficiency are still below normal, according to Vice-Mayor Zhang.

The Ministry of Transport and neighboring provinces and cities have worked together on various measures to ensure Shanghai's core function as an international shipping center is maintained, Zhang said, adding logistics on the roads, railways and waterways were assured.

Multimodal transport and contactless technology are being used to get bulk cargo from Shanghai to domestic destinations.

The average daily throughput of containers at Shanghai Port has exceeded 100,000 TEUs (twenty-foot equivalent units) since the beginning of April, allowing the city to function relatively normally as a center of international shipping while dealing with its COVID-19 outbreak, according to Zhang.

Shanghai's ocean-railway multimodal transportation has maintained operational efficiency despite the resurgence of COVID-19. Containers can be shipped directly via rail to Yangshan's Luchao Port Center in Pudong New Area and continue their voyage from Yangshan Port and beyond, said Wang Mingwei, deputy manager of the center.

Luchao Port Center has kept running around the clock during the current outbreak to guarantee the stability of supply chains and further help the resumption of production, according to Shanghai Railway Group.

Since March, when the metropolis began its battle with its worst COVID-19 outbreak in over two years, 655 ocean-rail multimodal train services have run, transporting 84,000 TEUs in cargo, up 42 percent year-on-year, according to Shanghai Railway Group.